At the Lowell City Council on Tuesday, July 22, 2014, Mayor Rodney Elliott made a motion requesting the City Manager have the Chief Financial Officer and Superintendent of Schools produce a report regarding the costs incurred to educate newcomer students.  Besides Mayor Elliott, Corey Belanger was the only City Councilor to speak on the motion.  The following is a verbatim transcript of what Belanger said:

By Councilor Belanger:  Thank you Mr. Vice Mayor [Councilor Leahy was in the Chair].  I think this is a great motion.  And to get to Mayor Elliott’s points, that Lowell, we’ve always been a city of immigrants.  That is our foundation.  We have many nationalities here.  I visited many of the schools and it’s encouraging to see how diverse we really, really are, all the way to a young age.

But we got a problem that’s serious and it’s going to get far worse, of refugees, undocumented or illegal aliens, which ever term you choose to use, are pegged for Lowell.  We are on that list.  Many of which are unskilled and uneducated.  And they’re on their way.

Corey’s not saying we’re not the place for immigrants. He saying we’re not the place for THESE immigrants. We just need to hold out for the right types…you know, the 1850’s tired, poor, huddled masses types. And we have just the place for these types. We have a place in this city where they can warm themselves with a  bowl of hearty beef stew.  A place where the nectar of their homeland pours from 3 different taps. A place where the craic is grander than a Clare Island wedding party. A place where Tommy Makem’s (bless his soul) dulcet tones rain down upon thy guests like a spring shower.  A place so authentic you could convince yourself that Eamon De Velera once sat bar side watching a Red Sox spring training game hiding from John Bull’s informants.  A place…the only place, where you won’t be greeted by the words, “Wicked Irish Need Not Apply.”

To those folks we say, “céad míle fáilte!” 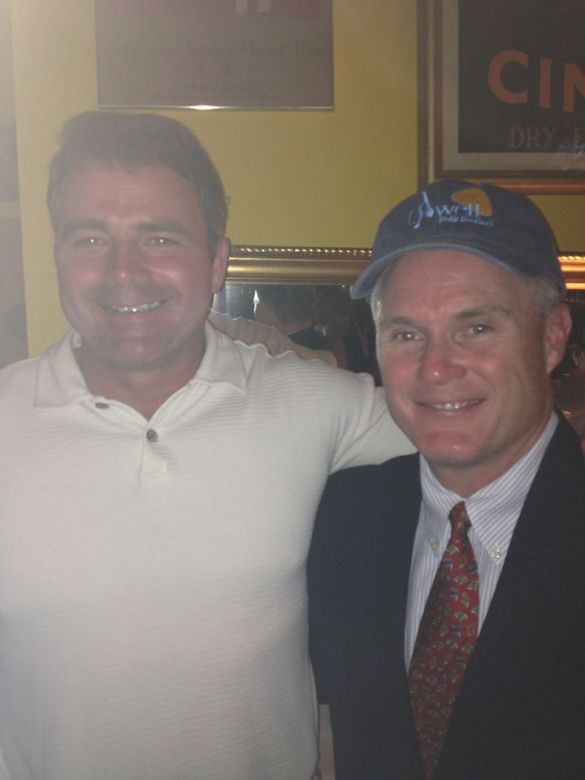 Jeez Rodney, Could you make a hat less cool? I’m not asking you to go flat billed-sticker on, but can we at least get a little commitment in the bend? You look like a sixth round draft pick out of Saskatoon. I don’t think we’re asking too much here. The Folk Fest is only the biggest event on the City Calendar. Loosen up, bruh! Send the Super Mayor costume to the dry cleaners for a couple days, tip a couple wine coolers, and let the citizens know this event is actually going to be fun.

PS.  Are you serious with that weak sauce knot?  Strong Mayors go nothing less than double Windsor.  It’s in the charter, bub!

Triple PS.  Who’s taking this picture?  Is it possible to take a picture this bad with today’s technology?

Yes, an American mayor actually said in 2014 that "the intent should be to move vehicles in and out of the city." http://t.co/JPD1Zj7nhb

…nobody knew that Ned was Jeff Speck. Boom Roasted Roddy!

Shades of Richard Pryor and Sam Kinison in their prime.  Just eviscerating the room with comedic nukes.  At a certain point, the laughter was so uproarious that it kept knocking WCAP off the air between every masterful line.  Panos and Fontanella have some splain’n to do because those of us on the radio end just got awkward silences.  You’re better than that fellas.

…and how about this Coakley bird trying to big league our mayor?   She’s a day removed from “SHEMA” and all of a sudden she’s a Last Coming Standing judge?  I wonder what she said about Willie Lantigua during all those Lawrence St Paddy’s day breakfasts?

Martha Coakley to Elliott: I was afraid I wouldn't get all your inside jokes…but I don't think anybody else did.

I suppose I’m a little late with my February updates, but it’s to be expected as I am a product of an underfunded school system.

Bill Samaris is dominating.  Seriously.  This guy is everywhere.   Council agendas. The Lowell Sun.  WCAP.  State of the Union addresses.  Throwing out first pitches.   Would somebody mind letting him know that this is not an election year?  Pace yourself, Billy boy!  You don’t want to pull a hammy.

I’m pretty sure we have a new City Manager. Congrats to Kevin Murphy on the well-deserved position.  First order of business is figuring out which properties to seize to add another 9-holes to Mt Pleasant.  I’m sure there will be a least one super long par 4 so all the members can have a sexual experience with one another every time they reach it in regulation.

Mayor Elliott is finally settling into a groove.  Council Meetings have finally settled into a nice flow.  We’re in, we’re out, no nonsense.  It’s like watching Mark Buehrle pitch… if Mark Buehrle kept a Mayor Murphy and Bernie Lynch voodoo doll in the dugout and was constantly leaving the mound to go stick pins in it.

Downtown Revitalization Starts and Ends with Mill No.5:  “The people of Lowell elected me because I know the difference between happy endings and great economic opportunity” is what I imagine Corey Belanger said after his now famous expedition with Grapes to snuff out discreet rub’n tugs in downtown mill complexes.  As it turns out, there’s this little project called Mill No.5 happening down there that nobody knew or heard about until now, thanks to Lewis and Clark.

As for the handjobs at Mill No.5, they’re probably not completely off the table but you’ll likely have to buy some artwork first.

The new Chief of Police is a Public Relations Tour de Force.  The City couldn’t look any better in the eyes of outsiders.  Images of gun battles and executions have faded to the background courtesy of a possible hooker who officially had too many Killer Millers.  Station morale is no doubt at an all-time high.  And as if there weren’t enough winners in this one; it looks like Mayor Elliott will most definitely be able to deliver on his campaign promise to hire new cops…anywhere from 3-5, I suppose.

Congrats to Councilor Grapes Mercier.  The only thing that I understood from what she was telling us last evening is that she recently adopted Dave Daly, and loves him like a son.  I’m pretty sure she thinks that he actually drives the ambulances.

Also, if you still wonder the reasons (not related to the 21st amendment) why Grapes tops the ticket every two years, take a look what she’s mustered since I last chimed in:

Scuttled a Library Board appointment. (Unsuccessfully)

Establish Guidelines on what the Mayoral portrait should consist of. (Pending I suppose).

Is inspecting every pane of glass in the city for safety.

Paved way for a garden on the Christian Hill Res.

What a time to stroll into the Mayor’s office. There’s a guy up in America’s Toque that’s defining greatness. You can walk the corridors of City Hall and point to our greatest gavel tappers, but none of them had Rob Ford to look to for inspiration.

The tenets of Rob’s approach are defined by the following…

Mayoral success begins and ends with charisma. If you can’t inspire the wallflowers and tame the extroverts, you’re dead. I’m not saying Rodney needs to smoke crack, he may want to start with an adult spirit and see how that feels first.

It’s not enough these days to just be a great guy. You need to tell anyone who will listen. And you must be expansive. Leave no stone unturned, even if it’s declaring the quantities of cunnalingus that’s available to you. That’s obviously a level of detail that doesn’t pertain to Mayor Elliott, just an example. Besides, with the years of public service that Rodney has given us, whether or not he was of the…(clearing the throat)…of the “selfish” sort, we would’ve heard by now.

You can’t let anyone, and I mean anyone stand in the way of serving your constituents. There’s no time for discretion. “Get out of my way!” We’ve seen the damage Mayor Elliott can inflict from a seated position, but the podium is a whole different league. Rodney may need to hit the weights.