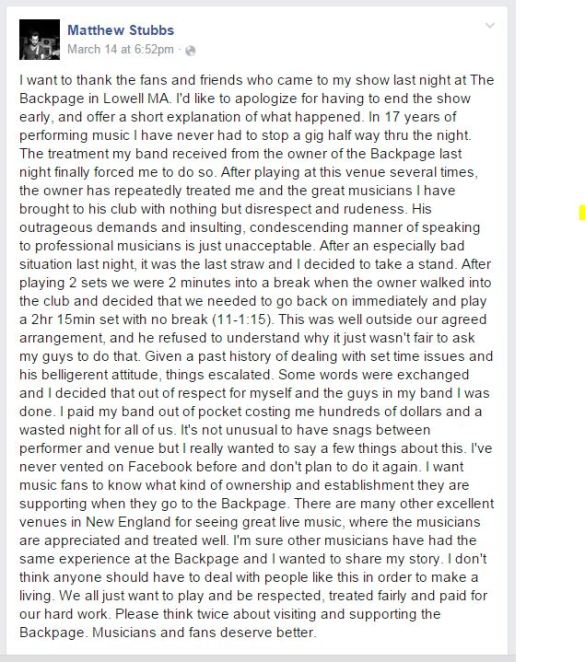 What recourse does a musician have if he feels he’s been mistreated by a club owner? Social media, of course. Singer-songwriter Matt Stubbs was so upset about the treatment of his band at The Backpage in Lowell the other night that he vented on Facebook, calling owner Bob Ramirez’s behavior rude, insulting, and condescending. “In 17 years of performing music I have never had to stop a gig half way thru the night,” wrote the roots rocker, who also plays guitar in the Charlie Musselwhite Band. “The treatment my band received from the owner of the Backpage last night finally forced me to do so.” The lengthy post was “liked” by over 225 people and shared over 150 times. Stubbs was particularly angry about Ramirez’s alleged demand that the band play a two-hour and 15-minute set — without a break. Ramirez didn’t respond to a phone call or e-mail Monday. “Some words were exchanged and I decided that out of respect for myself and the guys in my band I was done,” Stubbs wrote. “I paid my band out of pocket costing me hundreds of dollars and a wasted night for all of us.” Reached on the phone Monday, Stubbs said he posted on Facebook because he wasn’t allowed to tell the crowd why he stopped playing. “Nobody knew why it ended. I went to make an announcement, but [Ramirez] unplugged the mike and turned the house music up to 10 so no one could hear.”

Ahhh…the ole’ talent vs. club owner fued…a story as old as time itself. It’s hard to take sides in these matters, but thanks to Facebook and the Boston Globe, that’s exactly what we’re asked to do.
On one side, you’ve got the undoubtedly thin skinned guitarist who’s being a total baby about his contractual break time. How do I know he’s being a baby?…because he’s a professional musician. The whole point of all those hours of practice is to become rich and famous. And when that doesn’t work out, you’re still afforded the opportunity to spend weekends in small clubs, earning some pocket change, drinking for free, and melting faces of dudes that are high on Flomax.

The other big tell here would be the 1,000 word facebook post. Like come’on bro, this isn’t the New York Times OpEd. It’s facebook…give us a paragraph at most about how much the BackPage sucks and add a picture that captures the essence so I don’t actually have to read your nonsense. Also not helping his case are: END_OF_DOCUMENT_TOKEN_TO_BE_REPLACED