The City of Lowell is a darker place today. This week we say goodbye to one of its brightest stars, Tom McKay. Tom McKay was one of the most recognizable, active and socially responsible citizens in this city’s history. I could write a whole lot of words outlining all of Tom’s professional accolades as a businessman, entrepreneur, and philanthropist over the past 50 years, but I want to tell you about the man.

If you did not know Tom, I honestly feel bad for you. Tom was one of the most electric personalities you could ever meet. When Tom McKay walked in to a room, you knew it. He lit it up. I am not sure whether it was his big Irish smile, his always dapper appearance or that unmistakable voice? I am not sure it was any of those things. Tom just had “presence”. And when you had the great fortune of being in Tom’s presence, you knew you were about to be entertained.

Tom had an uncanny ability to make everyone around him feel welcomed. As one of my family’s closest and oldest friends, I had the luxury of being around Tom my entire life and I can say with conviction; it was always an ‘event’.

“How ah ya, buddy?” was one of Tom’s signature greetings when he reached to shake your hand. Many have joked that Tom called everyone ‘Buddy’ because he could not remember your name. The irony is Tom McKay was everybody’s buddy. He really was. Tom lured followers and friends like the Pied Piper. Perhaps the greatest story teller I have ever known, Tom’s charisma was captivating and you did not want to miss one minute of his wit and banter. Tom had a story (some may have been exaggerated) for every occasion and every audience. All of them were priceless. If stories can be considered gifts, then Tom was Santa Claus.

A devout Catholic, Tom was always one to give his time, energy and resources to those in need. When it came to charity and giving, Tom never said the word ‘no’. Both personally and professionally, Tom gave to any worthy cause that crossed his path.

While Tom led a very busy professional life, he was a family man to the core and they were always his first priority. His devotion and affection for his wife Lori and daughters Jennifer and Meredith were unwavering and always obvious. Tom was blessed with two beautiful granddaughters and in his last days another blessing came in to Tom’s world; his first grandson, James THOMAS. Oh the stories you will hear, Little “T”.

Yes, the city of Lowell and beyond is a darker place, but the Kingdom of Heaven is surely brighter with Tom in it.

Rest easy, Buddy, we all loved ya. 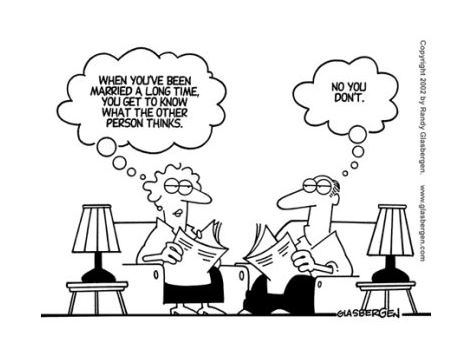 Have you ever noticed how behaved and polite you are to your spouse/girlfriend/boyfriend/partner in the presence of company?  When it comes to disagreements or differing opinions with a loved one, society has taught us to always maintain a level of respect and dignity when others are around; even if we have a strong inclination to speak out.  Men and women alike do not like to be publically embarrassed by their respective counterpart, even if they deserve it.  Whether you are at dinner with friends, a company party or your child’s school play, calling out your ‘better half’ with others in ear shot is a recipe for sure domestic disaster.

Of course you do, but your pants are on fire if you did not totally want to say otherwise.

Onward, how many times has your blood boiled about something your better half did or said and you have bit your tongue for the sake of social harmony?  Well, here is a breakout of what I think you guys and gals would really have liked to express when “this” happened.

STATEMENT: “Sorry we are late but Jimmy insisted he didn’t need directions.  I kept telling him it was the wrong way, but he wouldn’t listen!”

ACCEPTABLE RESPONSE: (polite head nod of acceptance), “Haha, I know, hon. I could have sworn it just off Route 66.  Should have listened to you.”

DESIRED RESPONSE: “I should have kicked you out of the car when I broke the speed limit you so delicately reminded me I was breaking.  If you weren’t babbling incoherently in my ear for the entire ride asking ‘if you look fat in those jeans?’ I wouldn’t have missed the turn.  By the way, yes you do.”

Here we see an all time classic.  A Man’s natural instinct is to track/hunt/discover without the aid of others, including his lady.