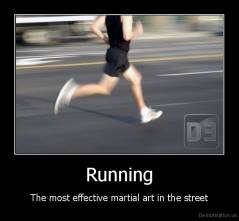 With The Boston Marathon just around the corner I wanted to offer a comprehensive review of the “sport” of running.

I can sum it up in 3 words: Running is stupid.

Whew. I feel better just writing those words down.

Let me backtrack a little bit. Running, for the purpose of exercise and general health is, I suppose, a positive and productive activity. Of course, running improves your cardio-vascular health, relieves anxiety, and certainly keeps the pounds off. But guess what, I don’t care. Running – just for the sake of running – is stupid.
Think back to when you were a kid. You ran for reasons. You were playing tag. You were running in a race against your friends. You were playing (real) sports. You were running from your Dad because you opened your big, sarcastic mouth one too many times (maybe that was just me?).
But, to run just…’because’. I’m all set.

Well, I can already hear the “BOOs” from all of you running rebels that live and breathe this horrific hobby. Several of my closest friends and family members love running and a few have even completed marathons. My Dad, my cousin, my college roommate to name a few. Listen, good for you guys! Congratulations! WOO HOO! Job well done! Yippie!

Which brings me to a more specific aspect of running; marathon running. Are you freaking kidding me? Why on God’s green earth would ANYONE want to run a marathon? Anyone? Bueller? Come on! Forget the actual act of running a marathon. I can almost understand the satisfaction of having thousands of fans cheer for you as you trudge through 26.2 grueling miles. I get that. But, how about the incredible amount of training and preparation that goes into it all? No thanks. Months of work. Millions of miles (maybe not millions, but it’s called alliteration, folks). Hundreds of hours of your time.

“If you have never experienced a runner’s high, then you should not give your opinion.”

Too late and here it is: Running is stupid.

Well, I think I have clearly relayed my standpoint on the subject, but I am going to offer you a chance to get back at me. Perhaps there is a more personal reason for out-of-the-blue attack on all of you jogging jackasses?

I started running this week.

Yes, yes…I know. Laugh all you like. Not sure what inspired me to start this week. Possibly because of the 87 pounds of corned beef and cabbage and 105 pints Guinness I have ingested over the past few weeks. Could be that I have been lacking any exercise program in my life for a while. Entirely feasible that I was feeling guilty that my wife has recently decided to taking up jogging with the rest of you imbosiles. Could be all of the above? Doesn’t really matter, but I woke up earlier this week and took to the street.

I began my first jog in a very long time at a slow and steady pace. I am not looking to break any records. I have no goal or end game in mind. I am simply out here to feel a little better about my health and possibly drop my blood pressure down to a normal range. What I soon learned was that it would not be the actual act of running that would cause me issue; but rather…panic.

As I made my first turn down a side street I realized how damn dark it is at that time of day strictly reserved for the newspaper kid and insomniacs. Suddenly, I felt an overcoming sense of fear. A dog (90% positive it was Cujo) barked from its yard and I nearly jumped up a tree like a Tom & Jerry episode. I smelled something? Oh God, it’s a skunk. Where is it? Christ, he is going to spray me right in the face! Who‘s that coming at me? Crap! I bet it’s a serial kill….nope; it’s another one of you stupid joggers.

“Hey man” I huffed at him like a 80 year old, chain-smoking asthmatic as I am trying to play the role of neighborhood Kenyon. I was completely thrown off my game. All of these distractions and empty fears were actually adding stress to this supposed stress-reducing activity. My pulse was not racing from the intense aerobic workout. It was because clearly there was a madman (or a blood thirsty, rabid animal) tracking me through the neighborhood. A Boogey Man (quite possibly Boogey Men?) was surely on my tail. That I know for a certainty.

Before I knew it, I was actually sprinting – not jogging – in one direction; back towards home. I am not going to risk my life over this silly pastime. I will not be maimed by some psycho or wildebeest for the love of this game. Just not worth it. I have a family to think about for crying out loud.

And there ends another chapter of my storied athletic career. Sneakers are retired. Wind pants are doing just that; blowing in the wind. I am hitting the proverbial showers for good.

Best of luck to all you marathoners!

One thought on “Can I Be Frank?: Running is Stupid”