We’re just about up to our necks in Olympics now…assuming you haven’t figured out that the Olympics were actually held a month ago and NBC is carefully tape delaying the shit out of us.  Since I don’t operate on Russian time, I’m going to throw this one back out to our Sochi correspondent, Alysha Lynch for the latest through the midweek:

If you missed previous updates.

Alysha’s Best Moments through the mid-week:

1.       Bob Costas being replaced by Matt Laurer:  Sorry Bob, but your run as the longest Olympic host since the Olympics moved to NBC is over.  We know this isn’t permanent but maybe this will teach you a “life lesson” next time when you decide to wash your face with not so clear looking water.  Your parting moments with Mary Carillo were pretty funny, taking shots of Russian vodka on tv like you didn’t give a fuck when really you were dying on the inside knowing NBC’s golden boy Matty L was on his way in to start practicing his lines.    And so far I must say Matt is a breath of fresh air, I feel like he is taking his reporting to a whole other level.  So take your time healing Bob, we don’t want to see you back until your eyes are normal color and you aren’t wearing those silly glasses anymore!

Editors note: If you don’t believe Matt Laurer wasn’t farting on Bob’s pillows, I don’t want to know you.

2.       Cross Country Skier who finished dead last:   I know what you are thinking as you read this, “Alysha, how can someone who came in dead last be the best moment?”  Clearly you didn’t watch this firsthand account of “Olympic Spirit!”  Just when I thought things couldn’t get any better with cross country skiing after the weekend’s awesome commentating, this happens and pulls on my heart strings.    Russian skier Anton Gafarov looked as though he wasn’t going to be able to finish the race.  He crashed and broke a ski, which is obviously something you need when competing in cross country skiing (in case you missed the whole needing skis to compete thing).  Leave it to our neighbors of the north, Canada, to come in and save the day!  Team Canada Coach Justin Wadsworth saw what was happening and gave Anton a ski so that he could finish the race, coming in dead last.  But you all know what we call a doctor who graduates last in his class…a “doctor.” So he didn’t medal but at least he can go home knowing he finished and became an instant YouTube sensation!  I can only imagine what cross country skiing has in store for me this coming weekend!

3.       Norway’s Curling Teams uniform:   If curling wasn’t already the number one slot on your DVR schedule for Olympic coverage you need to grab your remote and set it!! If you can’t wait that long, and really I don’t blame you,  Google immediately “Norway’s Curling Team pants”    They are from a company called Loudmouth Golf and they are pretty epic.  It’s what would happen if your grandfather’s argyle socks threw up all over your legs, why wouldn’t you want to wear those!   I am thinking I may order the boys at Sons of Franky Cabot a few pairs as a “thank you” for letting me cover the Olympics for them!

Alysha’s Worst Moments through the mid-week:

1.       Switzerland vs USA Woman’s hockey:  This was a tossup for me because this easily could have been a best moment for the USA team but really, when you lose 9-0 and the USA scores 4 goals in the matter of a minute, that’s pretty bad!  I’m pretty sure Switzerland forgot that they were supposed to show up and play a game, maybe they thought it was just a scrimmage and the goals didn’t count??  Team USA loved it I am sure but come on Switzerland, I get that you are always considered “neutral” but you need to try harder and not just give the win to your opponent just so they won’t be mad at you! 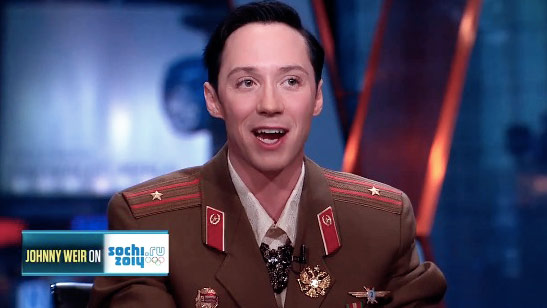 2.       Johnny Weir’s fashion:  Johnny, oh Johnny, I didn’t think it could get any worse for you and yet somehow you made a liar out of me.    He was quoted as saying that his inspiration for his unique wardrobe while in Sochi is Stanley Tucci’s character from the Hunger Games.  “I’m trying to stay between the lines of Johnny on Skating with the Stars and the rest of the NBC men’s family in Brooks Brothers.”   Wow,   I am speechless,  basing your Olympic fashion choices after a fictitious character says to me “I’m here and I want you to notice me”  I personally don’t think Mr. Weir has to dress like that to get noticed,  his personality is doing the job just fine.  Delete the number of the costume designer for hunger games immediately and no one will get hurt. 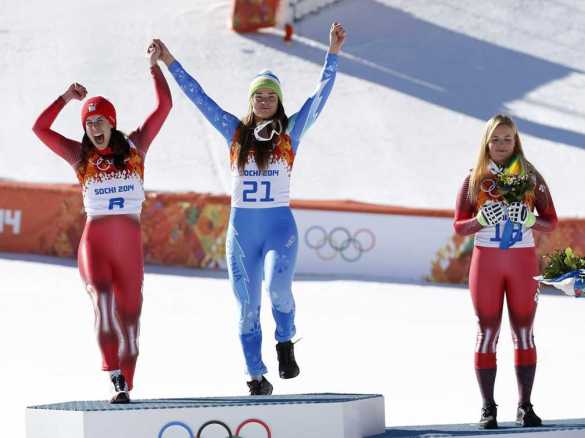 3.       The girl who lost silver because there was a tie for gold:   A tie was awarded in the woman’s downhill ski event and I feel for the poor girl who technically finished 2nd but yet only got a bronze. How do you get excited for that??  Silver is way cooler than bronze, let’s face it!  And now she has to go back to her country and explain what the heck happened.  And I am guessing in her country there isn’t a translation for “Almost only counts in horseshoes and hand grenades”    Oh wait, I have an idea, I can send her some silver duct tape to put over her bronze medal.  Duct tape fixes everything, right?