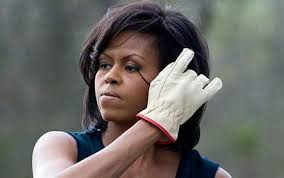 WASHINGTON (Reuters) – In the famous White House kitchen garden, tomatoes are rotting on the vine. Herbs have gone to seed. And the sweet potatoes – a favorite of President Barack Obama – have become worm food.  It’s another impact of the government shutdown, one that only the fox and the many squirrels that live on the White House grounds could love.

A foodie blog called Obamafoodarama that obsessively covers the White House “food ephemera” and the administration’s food policy has posted photos of the normally immaculate garden looking more like what most gardeners’ plots appear at this time of the year – overgrown.

“Due to the shutdown, garden maintenance has been reduced considerably and only being watered as needed,” a White House official confirmed, speaking on background.

Stop the presses!!  You mean FLOTUS isn’t personally responsible for the daily up keep of her organic garden like we were told in 2009?  Why should the Government shutdown affect her throwing on some sweats and her crocs and getting little Sasha and Malia out of the house with the dogs and pick some produce.  Maybe donate some of it to the local soup kitchen?  There’s literally pounds of this stuff just rotting on the vine at the White House.  I can’t think of a better symbol with this shutdown fiasco.